A tug-of-war with over 400 years of history!
A heated battle of rugged men

They say the Sendai Otsunahiki began over 400 years ago. Roughly 3,000 shirtless men wrapped in a white Sarashi compete at tug-o-war using a massive rope that over 1,500 people made together earlier that morning. The rope reaches roughly 400m in length and weighs up to seven tons.

It is said that the festival originally started as a way for warriors to prepare themselves, heightening their command for war during the Sengoku Jidai, or warring period, of Japan. The battle also represents a the local's wishes for prosperity in business and a rich harvest.
The powerful pushing and shoving of the local men when taking the offense against the opposing team is a real sight to see.

Locals start making the giant rope used in the tug-of-war from early in the morning. Thanks to the help of over 1,500 high school students and adults, hundreds of thin ropes are woven together to great one massive one. It takes over half a day of working and chanting to complete the rope. The general public is also able to join in on making the rope so enjoy the whole day as you get ready for the night battle.

2. Watch the battle continue until the rope is cut!

The highlight of the Sendai Otsunahiki, is when the men in the center of the battle scramble and push as nearly 3,000 people tug on either side.

Tug-of-wars usually don't take long to decide a winner, however with this battle, rings on the ends of the rope called "wasa" are hooked over stoppers called "dangi" while the teams change strategies, making for a long tug-of-war lasting over 1.5 hours. Finally, you won't want to miss the judge, who decides the winner, cut the rope, marking the end of the battle.

The venue location changes according to a three year schedule so be sure to check the location of this year.
Those who want to participate in the tug-of-war should gather at the venue by 8:15 pm. Please bring your own Sarashi (white clothe to wrap around your abdomen), working pants, and tabi shoes or any other fitting foot wear. Please make sure to wear them during the battle. Women are also able to participate. Please do not wear sandals.
For those who are not used to participating, if a person comes by blowing a whistle and wearing a sky blue head wrap, please yield to the side. 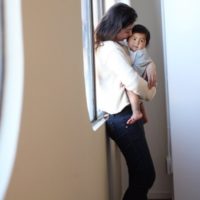 Misato Soares Hirata
Writer
Born in Tokyo. Always searching something that I don't know yet.